Slingshots depend on strong elastic materials, and thus date no earlier than the invention of vulcanized rubber in 1839. By 1860 they had already established a reputation for juvenile use in vandalism. For much of their early history, slingshots were a “do-it-yourself” item, typically made from a forked branch to form the “Y” shaped handle, with rubber strips sliced from items as inner tubes or other sources of good vulcanized rubber and firing suitably sized stones. While early slingshots were most associated with young vandals, they were also capable hunting arms in the hands of a skilled user. Firing projectiles, such as small stones, slingshot was capable of taking game such as birds. 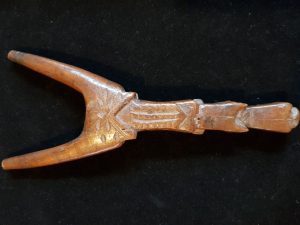