The Bogolan or Bogolanfini is a textile in cotton from Mali. It is traditionally hand-made and dyed with fermented mud. In the Malian culture, the Bogolan was worn by hunters who would use it for camouflage or ritual protection. In the Malian culture, it is still said that the bogolan has the power of absorbing dangerous mystical forces, which are released during childbirth. The dye technique is associated with several Malian ethnic groups, but the Bambaran version has become best known outside Mali. In the Bambara language, the word bògòlanfini is a composite of bɔgɔ, meaning “earth” or “mud”; lan, meaning “with” or “by means of”; and fini, meaning “cloth”. Although usually translated as mud cloth, bogolan actually refers to a clay slip with a high iron content that produces a black pigment when applied to handspun and handwoven cotton textiles. 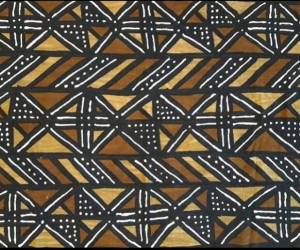