Ifugaos or Igorots are the people inhabiting Ifugao Province in the Fillipines on the island Luzon. The term “Ifugao” is derived from “ipugo” which means “earth people”, “mortals” or “humans”. Although a majority of them converted to Catholic from their original animistic religion, from their mythology, they believed that they descended from Wigan and Bugan, who are the children of Bakkayawan and Bugan of the Skyworld (Kabunyan). The Ifuago are known for their rich oral literary traditions of hudhud and the alim. The Ifugaos host a number of similarities with the Bontocs, mostly in agriculture. From a person’s birth to his death, the Ifugaos follow a lot of traditions.  The men are the ones who hunt, recite myths, and work in the fields. Women also work in the fields, aside from managing the homes and reciting ballads. The Ifugaos believe in life after death so those who are murdered are given a ritual called opa to force their souls into the place where his ancestors dwell. Ifugao houses (Bale) are built on four wooden posts 3 meters from the ground, and consist of one room, a front door (panto) and back door. 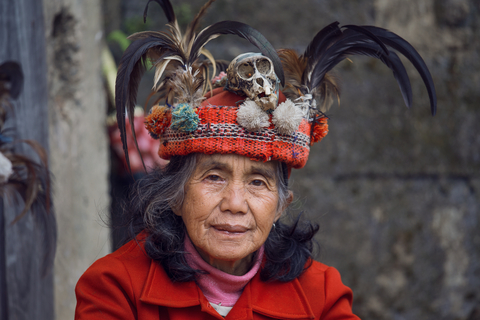