Nagas are various ethnic groups native to the northeastern India and northwestern Myanmar. The groups have similar cultures and traditions, and form the majority of population in the Indian state of Nagaland and Naga Self-Administered Zone of Myanmar; with significant populations in Manipur, Arunachal Pradesh and Assam in India; Sagaing Division and Kachin State in Myanmar. The languages spoken by Nagas are largely Sino-Tibetan. The Naga people belong to various ethnic groups, among which: Angami, Ao, Chakhesang, Khiamniungan, Konyak, Lotha, Makury, Mao, Rengma, Poumai, Rongmei, Sümi, Tangkhul, Tangshang, Zeme. The Konyak warrior tribe is one of the many Naga tribes. But what sets them apart from the rest of the tribes of this northeastern Indian state is their fierce headhunting history, which was part of their strong warrior tradition. 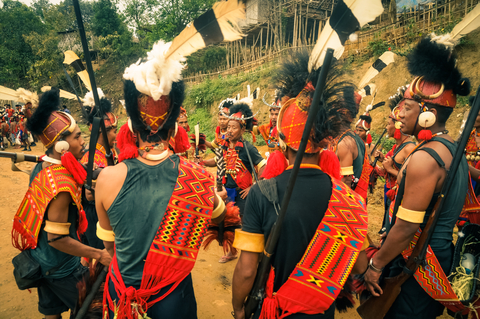