Religion in the Himalayas

Several places in the Himalayas are of religious significance in Hinduism, Buddhism, Jainism (Jain Dharma, an ancient Indian religion) and Sikhism (the world’s 5th religion). A notable example of a religious site is Paro Taktsang, where Padmasambhava is said to have founded Buddhism in Bhutan. In Hinduism, the Himalayas have been personified as the king of all Mountain – “Giriraj Himavat”, father of Ganga and Parvati. A number of Vajrayana Buddhist sites are situated in the Himalayas, in Tibet, Bhutan and in the Indian regions of Ladakh, Sikkim, Arunachal Pradesh, Spiti and Darjeeling. There were over 6,000 monasteries in Tibet, including the residence of the Dalai Lama. Bhutan, Sikkim and Ladakh are also dotted with numerous monasteries. The Tibetan Muslims have their own mosques in Lhasa and Shigatse. 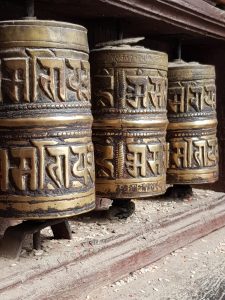 All Nepal and Tibet