Aboriginal Australians are the Indigenous peoples of the Australian mainland and many of its islands, such as Tasmania and the Tiwi Islands, but excluding the Torres Strait Islands. The term Indigenous Australians refers to both groups collectively. Torres Strait Islanders are ethnically and culturally distinct, despite extensive cultural exchange with some of the Aboriginal groups. Aboriginal Australians comprise many distinct peoples who have developed across Australia for over 50,000 years. In the last two hundred years they have been defined and started to self-identify as a single group ‘Aboriginal’ peoples. In the past, Aboriginal Australians lived over large sections of the continental shelf and were isolated on many of the smaller offshore islands and Tasmania. Before extensive European settlement, there were over 250 Aboriginal languages. 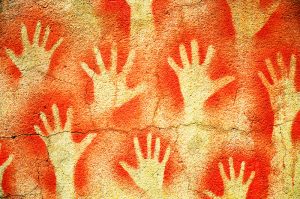