A mineral is a naturally occurring chemical compound, usually of crystalline form and not produced by life processes. A mineral has one specific chemical composition, whereas a rock can be an aggregate of different minerals or mineraloids.

Minerals are classified by variety, species, series and group, in order of increasing generality. There are more than 5,500 known mineral species.
Minerals are classified by key chemical constituents; the two dominant systems are the Dana classification and the Strunz classification. Silicon and oxygen constitute approximately 75% of the Earth’s crust, which translates directly into the predominance of silicate minerals. The silicate minerals compose over 90% of the earth’s crust. The silicate class of minerals is subdivided into six subclasses by the degree of polymerization in the chemical structure. Other important mineral groups include the native elements, sulfides, oxides, halides, carbonates, sulfates, and phosphates.

Minerals are not equivalent to rocks.

A rock is an aggregate of one or more minerals or mineraloids. Some rocks, such as limestone or quartzite, are composed primarily of one mineral—calcite or aragonite in the case of limestone, and quartz in the latter case. Other rocks can be defined by relative abundances of key (essential) minerals; a granite is defined by proportions of quartz, alkali feldspar, and plagioclase feldspar. The other minerals in the rock are termed accessory, and do not greatly affect the bulk composition of the rock. Rocks can also be composed entirely of non-mineral material; coal is a sedimentary rock composed primarily of organically derived carbon.

In rocks, some mineral species and groups are much more abundant than others; these are termed the rock-forming minerals. The major examples of these are quartz, the feldspars, the micas, the amphiboles, the pyroxenes, the olivines, and calcite; except for the last one, all of these minerals are silicates. Overall, around 150 minerals are considered particularly important, whether in terms of their abundance or aesthetic value in terms of collecting.

The three classes of rock are sedimentary, metamorphic, and igneous

Sedimentary rocks are formed from sediment. Generally it is fairly soft and may crumble easily. This is usually the only type that contains fossils. Examples of this rock type include conglomerate and limestone.

Metamorphic rocks are formed under the surface of the earth from the metamorphosis that occurs due to intense heat and pressure. These rocks have ribbonlike layers and may have crystals, formed by minerals growing slowly over time, on their surface. Examples of this rock type include gneiss and marble.

Igneous rocks are formed when magma cools and hardens. Examples of this rock type include basalt and obsidian.

Gems are minerals with an ornamental value, and are distinguished from non-gems by their beauty, durability, and usually, rarity. There are about 20 mineral species that qualify as gem minerals, which constitute about 35 of the most common gemstones. Gem minerals are often present in several varieties, and so one mineral can account for several different gemstones; for example, ruby and sapphire are both corundum, Al2O3 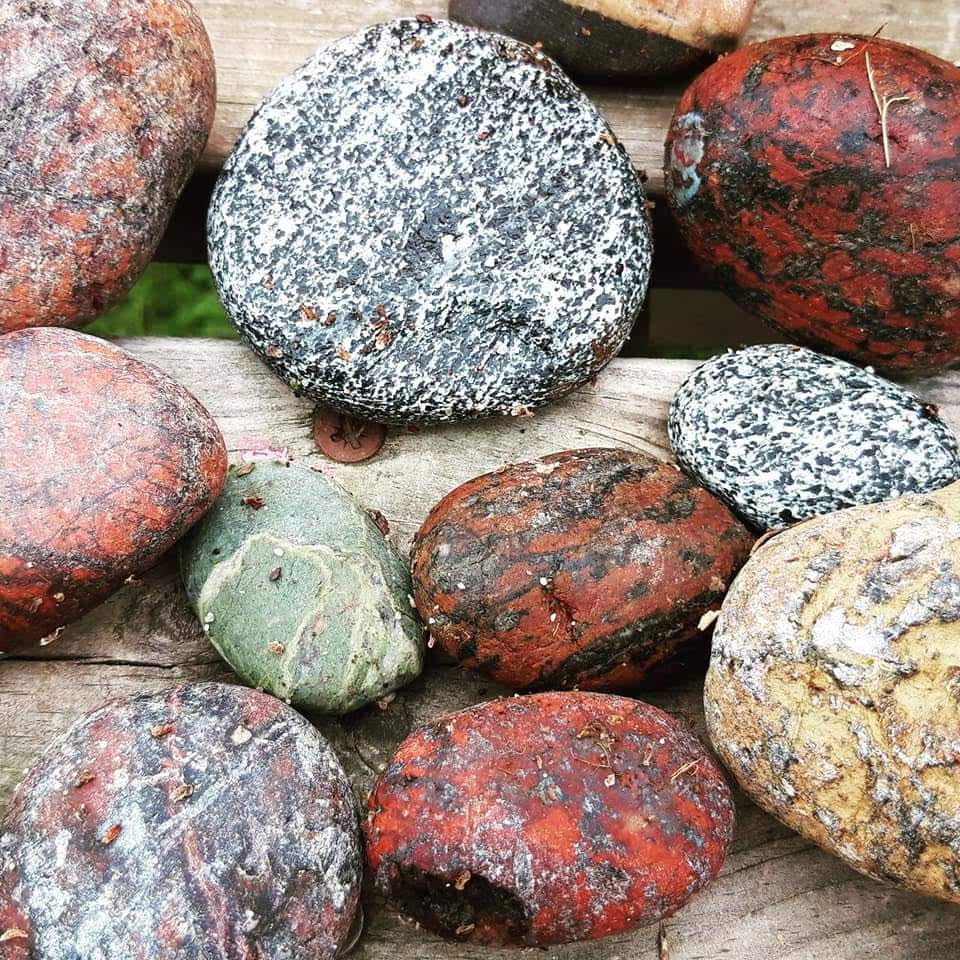