Nkisi or minkisi (if more than one) are spirits or an object that a spirit inhabits. It is frequently applied to a variety of objects used throughout the Congo Basin, that are believed to contain spiritual powers or spirits. Minkisi serve many purposes. Some are used in divination practices, rituals to eradicate evil or punish wrong-doers, and ceremonies for protective installments. Many are also used for healing, while others provide success in hunting or trade, among other things. Important minkisi are often credited with powers in multiple domains. Most famously, minkisi may also take the form of anthropomorphic or zoomorphic wooden carvings. Nkondi or minkoni (if more thane one) are a type of minkisi that are considered or look aggressive. Because many of the nkondi collected in the nineteenth century were activated by having nails driven into them, they were often called “nail fetishes”. Many nkondi also feature reflective surfaces, such as mirrors, on their stomach areas or the eyes, which are held to be the means of vision in the spirit world. 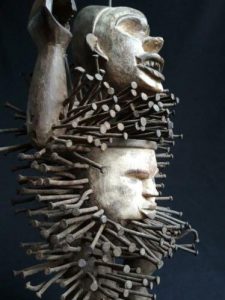