The significance of the Cassowary

The Cassowary is a flightless bird that is native to the tropical forests of New Guinea, East Nusa Tenggara, the Maluku Islands and northeastern Australia. The cassowary plays an important role as rainforest gardener. They have been recorded eating over 238 species of plants, and they play an important role in maintaining the diversity of the rainforest. Some New Guinea Highlands societies capture cassowary chicks and raise them as semi-tame poultry, for use in ceremonial gift exchanges and as food. Cassowaries are very important to the native people of New Guinea both economically and ritually. Cassowaries have been traded for pigs and even as brideprice for a wife and compensation payment especially in the highlands provinces. Many tribes use the feathers to decorate headdresses, and the feather quills for earrings. The sharp claws are often placed at the tips of arrows, while the strong leg bones are used as daggers. For many native people, cassowaries are full of legends and mystical powers. Some tribes believe that cassowaries are reincarnations of female ancestors, while others believe that the cassowary is the primal mother. These tribes do not hunt or deal in trade with cassowaries. 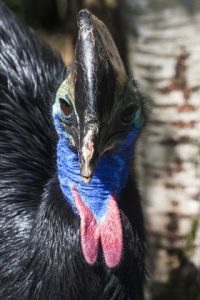 All Weapons from Oceania